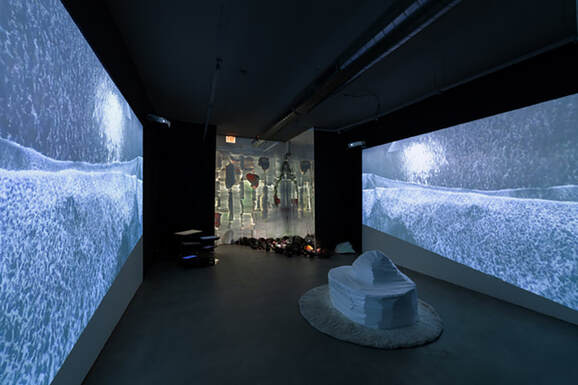 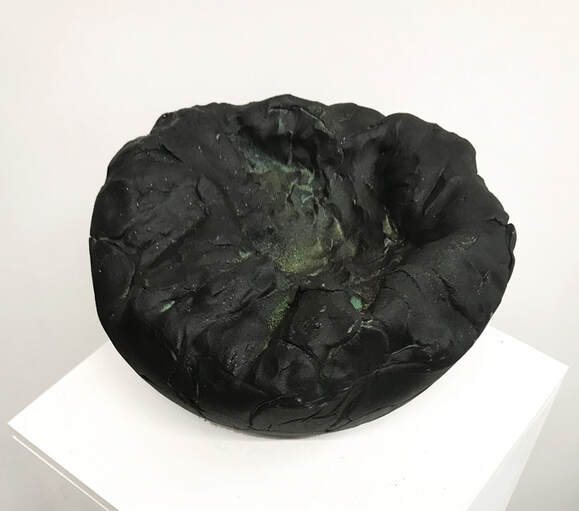 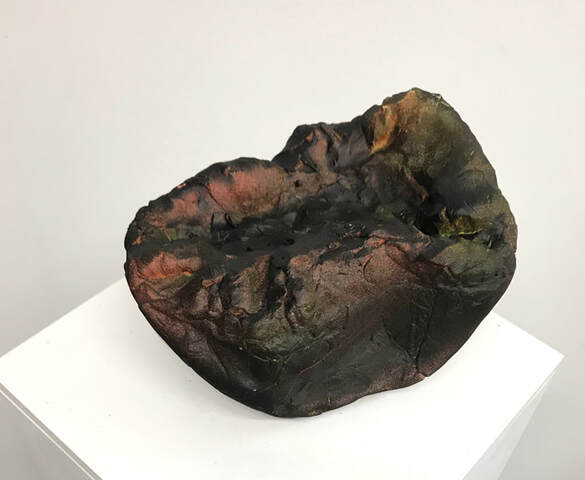 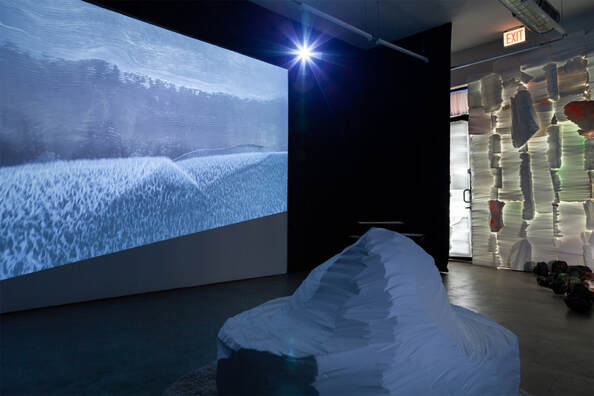 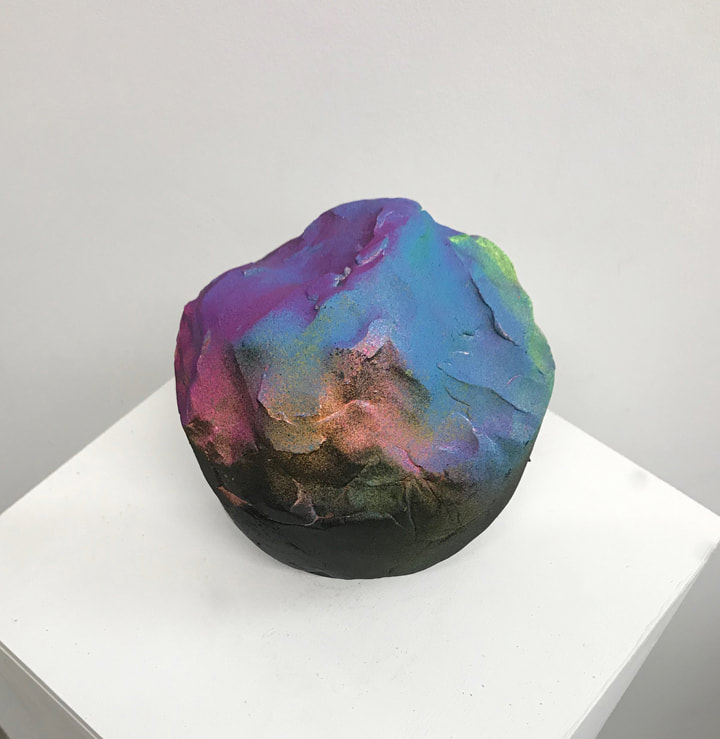 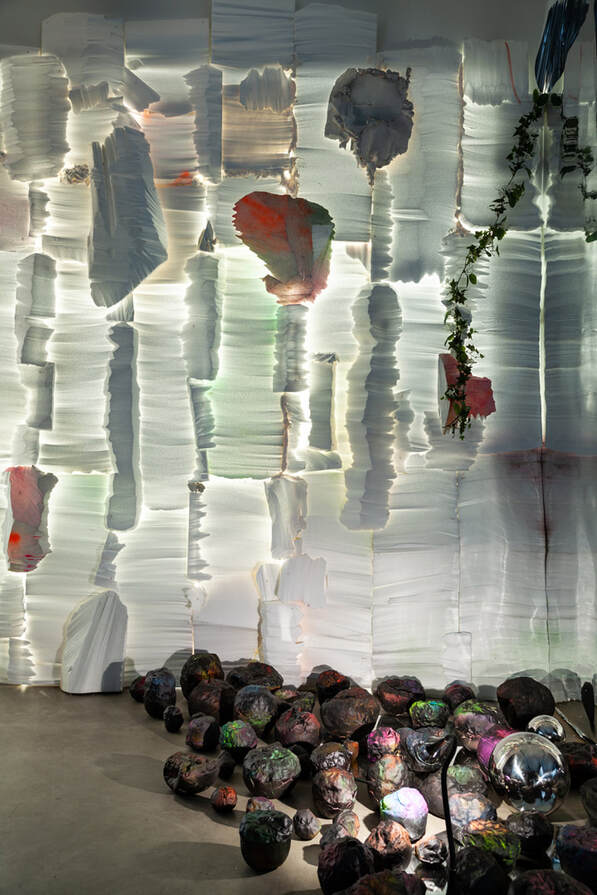 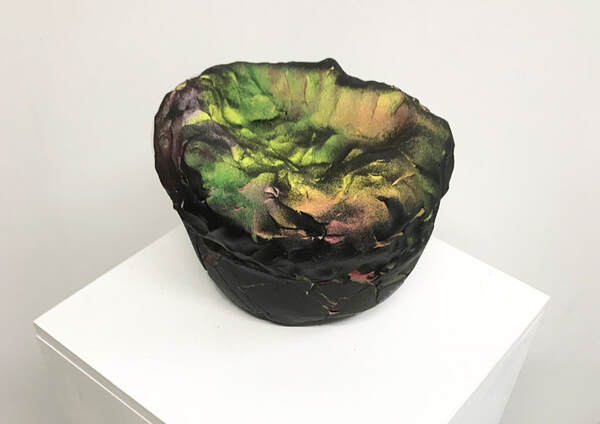 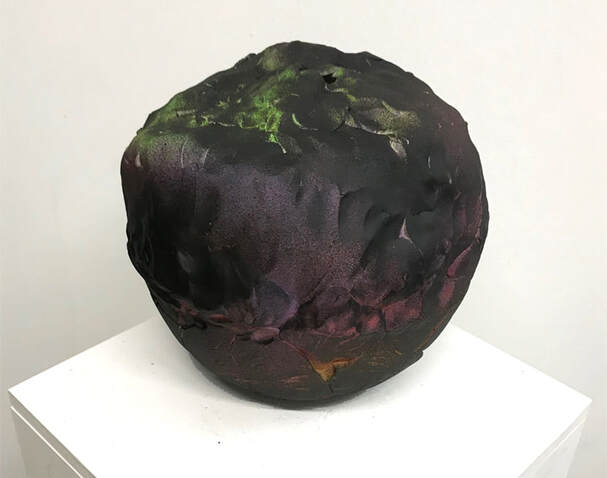 The sculpture and video works invoke the siege of the female body and its liberation from corporeal existence through a watery upheaval. The exhibition includes videos of lava tubes and ice caves with spiraling haiku by Stephanie Barber, original sound design by A.J. McClenon, handmade “lava rocks” in clay, along with a snowy Styrofoam mountainside. There will be several small, personal videos by Duff playing on face-up flat screen monitors in a collage cluster reminiscent of lily pads.

In Ott’s Ethical Will, written at the end of her life, she says that she likes the idea that we come from water and return to water. Duff attempts to return Ott to water in the large two-channel, two-screen video transforming the gallery into the center of a lava tube. The video and sound installation will sweep the viewers back and forth, from below to above and back again.

Ott said of her large installation at Hyde Park Art Center in 2016, “I’ve always believed that my artworks offer a place where trauma can be transformed into something else by turning things inside out and dislodging them into a space of pure play.” Duff’s intention is to create a space of healing for the art community of Chicago from the traumatic loss of one of its most beloved members.

Sabina Ott (1955 - 2018) is known for her broad range of work—from painting to installation to sculpture—and her central role in the art world as teacher, administrator, and recently, as the founder of the exhibition space Terrain, which invited artists to create installations and performances using the exterior of her former Oak Park home. She earned both her BFA and MFA from the San Francisco Art Institute. Exhibiting since 1985, Ott has participated in over 100 solo and group exhibitions at institutions in Sao Paulo, Brazil; Auckland, New Zealand; Melbourne, Australia; and many cities across the US.

Her work is in numerous museum collections including The Whitney Museum of American Art, Los Angeles County Museum of Art and the Oakland Museum of Art, and has been reviewed in Art in America, Art Forum, New Art Examiner, The New York Times and The Los Angeles Times, among other publications. She has received a Guggenheim Fellowship for 2015 - 2016 and completed a public art commission for the Chicago Transit Authority and a solo exhibitions at the Chicago Cultural Center and Hyde Park Art Center. She most recently served as Professor of Art at Columbia College Chicago and was awarded CAA’s Distinguished Teaching of Art Award in 2016.

Dana Berman Duff (lives and works in Los Angeles and Mexico) was trained in sculpture and filmmaking, receiving her MFA in conceptual art from Cal Arts. Her work has been exhibited in a number of solo shows, including Max Protech Gallery (NYC), Richard Kuhlenschmidt Gallery (LA), Milford Gallery (NYC), as well as group exhibitions including: The Renaissance Society (Chicago), New Museum of Contemporary Art (NYC), Whitney Museum (NYC). Her work is included in the collections of the Museum of Modern Art and the New Museum of Contemporary Art in New York, the Phillips Collection (Washington DC), Brooklyn Museum (NYC), The Carnegie Museum (Pittsburgh), and a number of private collections. Duff currently serves as a professor of art at Otis College of Art and Design in Los Angeles.

Programming, including poetry readings and a performance by media artist A.J. McClenon, are being planned.