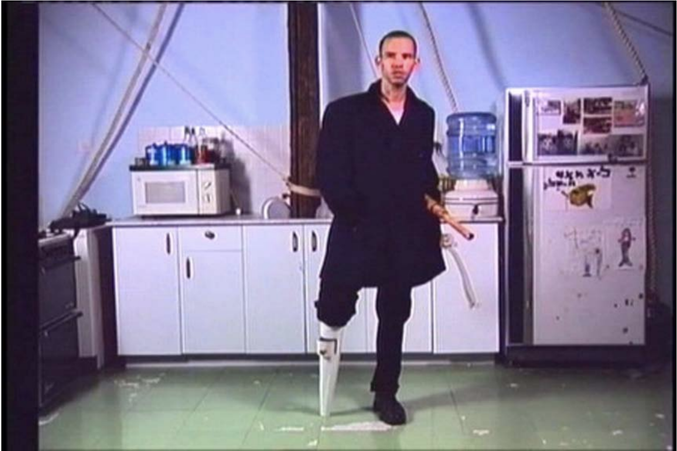 Uncommon commonalities deals with the performance of identity. Masks and costuming in the artwork act as a form of layering that are in conversation with the complex nature of today’s society, highlighting a shift toward ambiguity within identity. Rashayla Marie Brown’s photograph Wig Karma relates to one of her performances dealing with definitions of beauty and race within Western society. The transformative property of the wig is imbued with meaning when it is examined through the lens of societal preferences for long straight hair. Not Cliff (Conduits of Fantasy) 1, a drawing by Desirée Holman utilizes a mask to call attention to the use of props and costuming associated within popular television like The Cosby Show, and how this media acts as a vehicle for pushing ideas about race and class into our society. Glen Fogel’s photographs Call Me depict subway posters of celebrities that have been graffitied, pointing to societal ideas of celebrity while simultaneously illustrating the public’s response to these images in our broader visual culture. Einat Amir’s video Boi walks the literal and metaphorical lines of gender as it questions the performative nature of male and female through ambiguities of Amir’s own dress code and physical appearance. Moby Dick, an early video by Guy Ben-Ner is a culmination of the over arching theme of identity within the boundaries of society. Props, costumes, and elaborate sets transform Ben-Ner’s home and appearance, playing with our collective imagination through the use of common household objects and an age-old tale that has been branded into our literary consciousness.

Artists in this exhibition: Einat Amir investigates contemporary socio-political issues through works which oscillate between video and performance. Guy Ben-Ner is a consummate storyteller weaving allegory and historic fiction into works that often employ DIY aesthetics. Rashayla Marie Brown’s work spans photographic and video-based image-making; performance and social engagement/disruption; curation and installation; and theoretical writings infused with autobiography, subjectivity, and spirituality. Glen Fogel is a conceptual artist who works with themes taken from his own personal life and family as well as mass-market consumer culture. Desirée Holman’s multi-sensory work positions theatrical tools, like costumes or props, in settings that illuminate ideas of identity, knowledge, and the complexities of the human psyche.