Adam Daley Wilson
Notions Of Secular Barely Made Sense is a story of nature. This story, in some ways, is a modern adaptation of Romanticism, in particular the Hudson River School, which, at times, expanded all the way to New England. This part of the narrative wonders how cognitive conceptions of reason and science could possibly account for the beauty that is present even in nature’s most simple of moments, be they in air or woods. Here, the story also draws upon the Transcendentalists, also of New England, who held, in the same time period, that man, and nature, were both imbued with goodness, and could exist together in peace. This is where the story then pivots—Have we completely forgotten the notion that we can exist with nature in peace? Can we remember to live in harmony again, assuming we even want to? And can any notion of romantic beauty in nature be reconciled with the seeming paramount need for a narrative grounded in reason and science, to mitigate the problems caused by our subjective stories, now and from the past? The story then ends with a final chapter, the text of the work itself, which suggests that Thoreau and Emerson have not won out, that nature itself we have traded away, a trade that was the antithesis of transcendental, a trade that was base and transactional.

​This work in addition to referencing Ruscha as to the use of text over image, relies in great part on the image itself. This was a spontaneous photograph, taken by the artist in Maine. It is unfiltered, unretouched—see birds in the distance, among the clouds. This moment occurred as a summer thunderstorm gathered, miles away, just west of the Atlantic. The purple-violet tones please the artist very much—not only because they are photographically natural and true, but also because violet and violet-blues were used by the Impressionists to depict and symbolize nature itself. “I have finally discovered the true color of the atmosphere. It is violet. Fresh air is violet.” — Monet. The references to Thoreau and Transcendentalism are of deep meaning to the artist because, as a very young child, his parents would read stories to him at nearby Walden Pond. 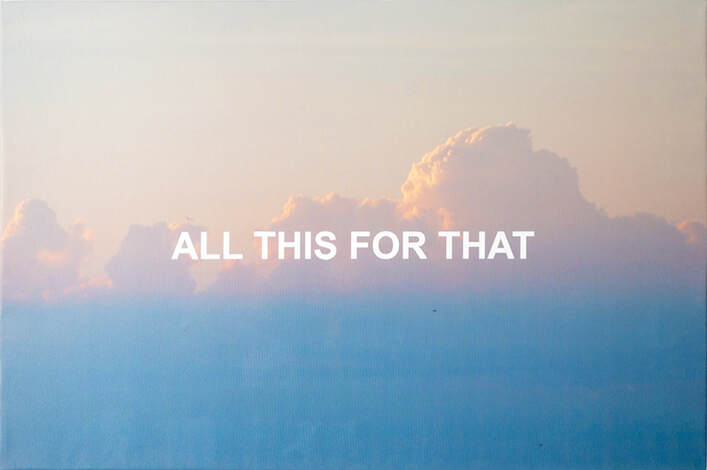