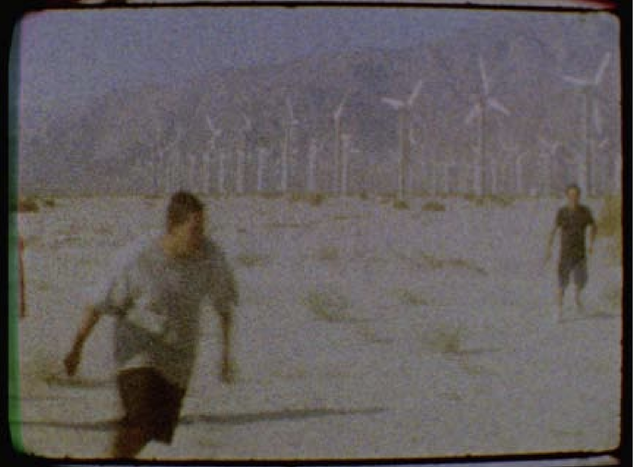 A Dream Deferred, 2015, still from video
A Dream Deferred: Diaz Lewis
In collaboration with Alejandro Figueredo, Diaz-Perera, and Cara Megan Lewis
10.16.2015 - 11.21.2015
​
Aspect/Ratio Projects is delighted to present a video installation from the artist collaborative Diaz Lewis A Dream Deferred. The work presents a family of undocumented immigrants and US-born children playing a game of soccer. Captured simultaneously on both 8 mm and HD video, the protagonists of the video pass in and out of the grain and into clarity and back again, chasing a goal. The 8 mm aesthetic challenges the viewer’s ability to identify the time period captured and the contrasting media aim to reflect the cycle of anti-immigration sentiment throughout US history.

Adopting the phrase “A Dream Deferred” from Langston Hughes pivotal 1951 poem Harlem to title this artwork, the collaborative Diaz Lewis allows Hughes’ questions to frame the moment in which millions of undocumented immigrants in the US now find themselves awaiting immigration reform. Will the Deferred Action for Parental Accountability (DAPA) and other actions be passed before President Obama’s term ends? A social activist, Hughes was speaking of the limitations of the American dream for African-Americans in the 1950’s and particularly the stark contrast between the freedom of the cultural renaissance of Harlem and the discrimination experienced by African Americans throughout the rest of the United States.

In past video installations, Diaz and Lewis have navigated the nebulous space between the unknown and a decisive action, including tracking the slow movement towards normalized diplomacy between Cuba and the United States, capturing a development project in mid-construction, and investigating the coming of age precipice on sexual awareness. As Robin Dluzen recently wrote in a Visual Art Source editorial reviewing their recent installation at THE MISSION, Cul de Sac, “The artists have captured that anxious sensation of waiting — the anticipation that evolves into hopelessness when a lofty goal seems so far out of reach.”